Didsbury 1 Murcia 0We landed easily, fought our way through Passport Control and Baggage reclaim – a broken stroller souring the mood. 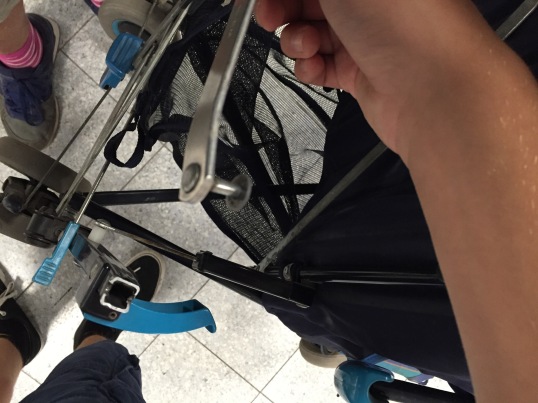 Savaged by Baggage Handlers
I find that however keen I am to stay on holiday that the first flat-vowelled Passport Officer and the first nasal “Yor-ite” remind me of how much I love this sceptred chunk of the North West: but not this time.
We arrived home slightly low, a great holiday shaded by its proximity to work, school, nursery and cold mornings. Except the Pearly Princess whose paleness had found the constant Spanish heat difficult and had made her quieter than usual. As we stepped into the damp mulch of British summertime she grew, her voice returned and as pulling into Didsbury she whooped and clapped – which perked us up. ready for some Mancunian cool

Four hours later Didsbury Son fell quickly into a pain that needed a speedy drive (still in shorts and sunglasses) to Children’s A&E. He is fine now, but needed an operation and is a bit sore.

My trepidation at coming home and the feeling of general malaise dispelled by the ease of getting from Didsbury to A&E in 15 minutes, the care he received from everyone and the quality of the drugs. Three of Manchester’s longstanding cornerstones.
Drains the tan a bit too quickly, but did feel like another rite of passage all around.

Like Loading...
Posted in being a dad, being Away, blathering on about Didsbury agsin, Children's operations, coming Home, Daddy daughter time, Marking your territory and tagged Children's A&E, Drugs, Manchester, Manchester International Airport, murcia, Operations, Operations to make you wince